Nigeria’s former minister of petroleum resources has been arrested in London, according to reports. It is believed Diezani Alison-Madueke was apprehended at the UK National Crime Agency on Friday 2 October. The agency posted on Twitter that five arrests had been made but declined to reveal the identity of those arrested. A spokesperson told IBTimes UK: “We cannot confirm or deny the identity of anyone who is arrested.” 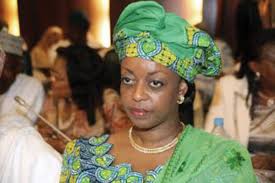 Alison-Madueke, 54, was allegedly arrested for bribery and corruption charges, according to the Premium Times. The former minister – who has been dubbed “one of the most powerful officials of President Goodluck Jonathan” – admitted to spending $3.5bn (£2.3bn, N577bn) of Nigeria’s money without budgetary approval in February 2014.

Alison-Madueke, who became the first female president of the Organization of the Petroleum Exporting Countries (Opec) in 2014, was arrested days after President Muhammadu Buhari appointed himself as the country’s oil minister, after he vowed he would recover millions of dollars worth of funds he alleged were stolen during previous administrations.

The leader also alleged some 250,000 barrels of Nigerian crude oil are stolen every day and sold to other countries at higher prices. In order to stop illicit activities in the oil industry, Buhari replaced the whole board of the state-run Nigerian National Petroleum Corporation (NNPC) and temporarily bannedsome 113 vessels from taking crude oil from Nigerian ports.

During her post as ministry, Alison-Madueke supported the unpopular attempt by Jonathan in 2012 to end fuel subsidies, arguing it posed a financial burden on the government’s finances. The government backtracked on its decision following rallies that caused at least 16 deaths.

Nigeria is Africa’s biggest oil producer but its lack of refineries – at present there are four and of these only three resumed production in July after months of inactivity – mean the country has to export about 90% of its crude oil and import petroleum products.

The country then sells fuel to Nigerians at subsidised prices and reimburses the difference to importers. This practice has been condemned by many, with some arguing it could save the government billions of naira every year, which could be invested into public services. Others have pointed out oil destined for Nigeria is sold to other countries at higher prices.