The sister of Sian Blake said the former EastEnders actress was set to leave the boyfriend suspected of killing her as she called for him to be ‘brought back to justice.’

Police discovered the partially decomposed bodies of former EastEnders actress Miss Blake, Zachary, eight, and Amon, four, buried in their back garden in Erith, Kent, on Tuesday – 20 days after they were reported missing.

Officers are still searching for her partner, the children’s father Arthur Simpson-Kent, 48, who was last seen on December 16, three days after Miss Blake was reported missing. 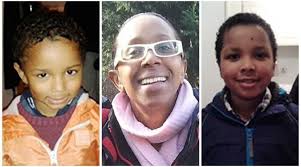 Simpson-Kent is believed to have fled to Ghana in West Africa, the country of his birth, after Miss Blake and her sons disappeared on December 13. He is thought to have travelled on flights via Glasgow and Amsterdam, and could have arrived in the African country three days after he was quizzed by British police at his home on December 16.

Today, Miss Blake’s sister Ava, 51, said Mr Simpson-Kent was a triple killer, and should be ‘brought back to justice’.

She also said that Miss Blake was planning on leaving Mr Simpson-Kent over Christmas, and described his as controlling.

‘I want him to face justice and explain why. It’s my nephews more than anything.

‘My brother is angry. My cousins are angry.

‘They are angry about Sian, but the boys have devastated us. We have lost a generation. We can never replace them.

‘I want him to be brought back to justice. He’ll have to answer to the courts of this country and to God eventually.

‘I don’t know what is going through his mind.’

The actress, who played home-wrecker Frankie Pierre in the BBC soap in the mid-1990s, and her sons were last seen during a visit to relatives in Leyton, east London, on December 13.

Three days later, after an organisation raised the alarm, police spoke to Mr Simpson-Kent at the family home. After the visit Miss Blake and the two boys were officially registered as missing.

Her silver-beige Renault Scenic was found in Calvert Avenue in Bethnal Green, east London, on January 3. It is not known who parked it there.

Scotland Yard has refused to confirm reports that Mr Simpson-Kent has fled to Africa, but a spokesman said: ‘Whether or not he is in the country is one line of inquiry.’