Faced with the horror of Tuesday’s gas attack on Syrian civilians, the Trump administration was initially silent before reverting to a well-trodden line – blame Obama.

The President said the “heinous actions by the Bashar al-Assad regime” were “a consequence of the past administration’s weakness and irresolution”, whilst sidestepping questions on what he might do in response.

It was a clear reference to four years ago, when Obama failed to deliver on his “red line” when he didn’t authorise military action against Assad in response to a sarin gas attack that killed hundreds outside Damascus.

Trump also called the assault in an opposition-held town in northern Syria “reprehensible” and one that “cannot be ignored by the civilised world”, reports the Associated Press.

The political tone of Trump’s statement took many US officials by surprise and several officials involved in internal administration discussions said the National Security Council had been preparing a different statement, until the president’s closest advisers took over the process.

It also jarred with tweets Trump sent during the Obama administration.

Trump is blaming Obama for not going into Syria—but he sent roughly 1000 tweets urging Obama not to go into Syria http://bit.ly/2o6JbqR

Trump left it to his top diplomat, Secretary of State Rex Tillerson, to assign culpability to Russia and Iran, Assad’s most powerful allies. Tillerson noted both countries signed up as guarantors to a recent Syrian ceasefire and said they must pressure Assad not to conduct more attacks.

The Britain-based Syrian Observatory for Human Rights said at least 58 people, including 11 children, died in the town of Khan Sheikhoun.

Witnesses claimed Sukhoi jets operated by the Russian and Syrian governments were involved. Videos from the scene showed volunteer medics using firehoses to wash the chemicals from victims’ bodies and lifeless children being piled in heaps. 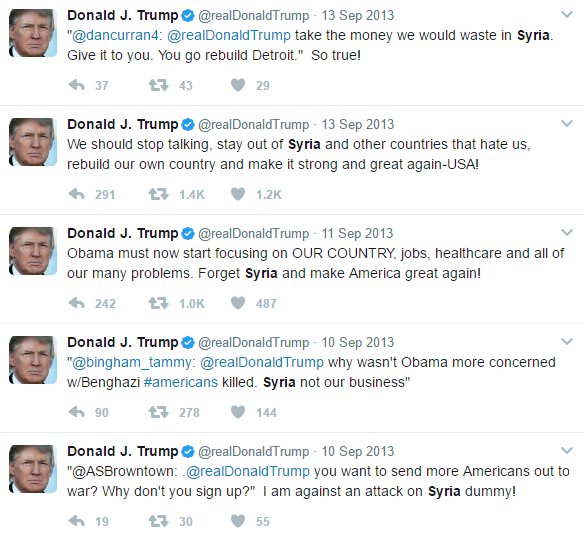 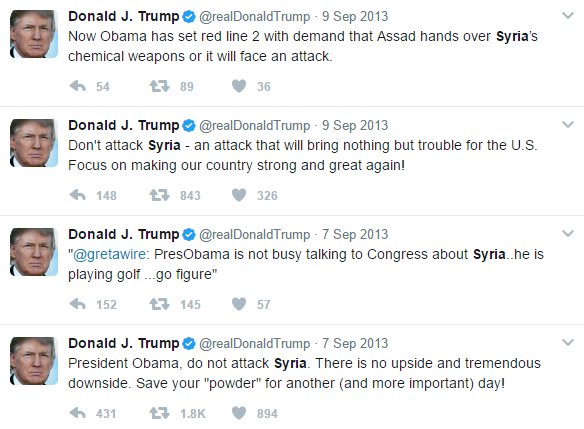 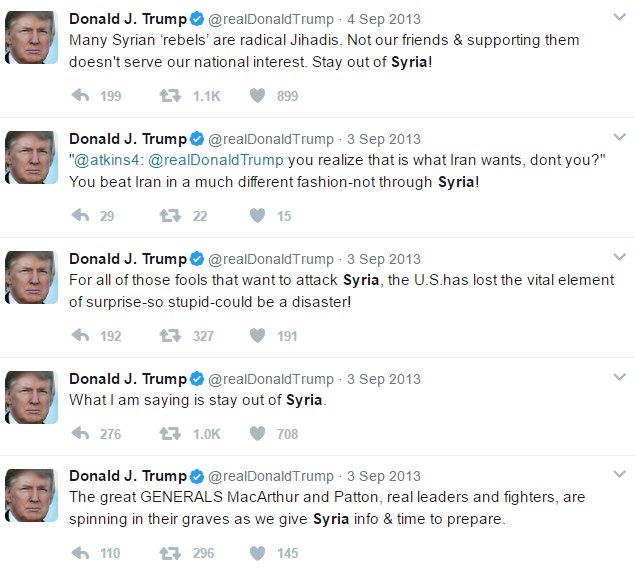 Today: Trump blames Obama in statement for not taking action in Syria.
Before today: Trump constantly said to stay out of Syria altogether.

The twin statements illustrated the competing forces pulling at the Trump administration. While Trump tries to show he’s dealing with extremist groups in Syria more aggressively than Obama, his administration has suggested it could align with Russia, Assad’s key military backer. And in recent days, top US officials like UN Ambassador Nikki Haley have suggested Assad’s removal is no longer a US priority.

But America’s Arab and European allies oppose any accommodation with Assad. Tillerson, in Turkey last week, outraged some foreign partners when he said Assad’s future was up to the Syrian people. And the idea of even an indirect alliance with a Syrian government that is gassing its own people will be a hard sell with a US public appalled by the reams of footage of the six-year civil war’s horror.

“It is at the least embarrassing to have Assad massacring civilians with chemical weapons at the same time Trump is trying to make the case that they’re potentially a partner,” said Phil Gordon, Obama’s top Mideast adviser from 2013 to 2015, including when the US president declined to retaliate militarily against Assad. Obama opted instead for a Russian-backed agreement to remove Syria’s chemical weapons stockpiles.

The chapter was seen internationally as a major blow to US credibility and, for Obama’s critics, a prime example of weak leadership. Syrian chemical weapons attacks continued after the deal with Russia and Syria.

Trump, Gordon noted, was facing the same dilemma and lack of solutions that plagued Obama’s deliberations.

In 2013, internal debate focused on everything from so-called pinprick operations that would have negligible effect on Assad to a broader strategy to push him from power. But regime change had its drawbacks, too, because it would require significant US military force and potentially leave a vacuum that could be filled by al-Qaida-linked and other extremist fighters among the opposition.

The Islamic State group’s later emergence only hardened Obama’s resistance to intervening. By the end of his tenure, the Obama administration had largely abandoned its pressure, first advocated by the president in 2011, for Assad to immediately leave power.

“President Obama said in 2012 that he would establish a ‘red line’ against the use of chemical weapons and then did nothing,” Trump’s statement said. But while Trump called the latest attack “intolerable,” he offered no suggestion of what he would now do.

It was a far different view than one Trump took at the time. Among his tweets on the matter, he urged Obama in all caps, “DO NOT ATTACK SYRIA – IF YOU DO MANY VERY BAD THINGS WILL HAPPEN.”

AGAIN, TO OUR VERY FOOLISH LEADER, DO NOT ATTACK SYRIA – IF YOU DO MANY VERY BAD THINGS WILL HAPPEN & FROM THAT FIGHT THE U.S. GETS NOTHING!

Asked how Trump might respond now, White House press secretary Sean Spicer said Tuesday, “I’m not ready to talk about our next step but we’ll talk about that soon.”

Both Trump and Tillerson referred flatly to chemical weapons usage, rather than a “suspected” or “reported” attack. The lack of restraint suggested the US had reached a high degree of confidence about what transpired and who was responsible.

US officials said there were some indications nerve gas had been used, though they suggested it could also be another in a series of chlorine gas attacks by Assad’s military. Chlorine isn’t a banned chemical substance, though it cannot be used as a weapon of war.